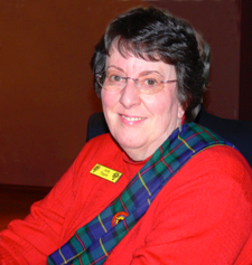 
Welcome to our new Clan MacLeod website, we hope you like it, if you have any suggestions please do let us know.

I would like to introduce myself as President of Clan MacLeod Societies of Canada (CMSC) 2016-2020. My name is Judy Tipple and I make my home on Saturna Island, the southern most Gulf Island of British Columbia, Canada.
It was with pride and pleasure that I accepted this position in July 2016 at the North American Gathering in Merritt, B.C. It will be a challenge for me to reach the level of leadership set by Jim MacLeod, but over the next four years I will do my best, aided by our National Council and under Jim's watchful guidance.

My association with a Clan MacLeod Society began in 1972 in Victoria, BC when my husband at that time Neil McLeod and I attended a dinner having received the invitation in the mail, the result of a “cold call” to all the M(a)cLeods in the Victoria phone book. My interest in MacLeodery grew from there. After moving to the Vancouver area we were active in the Greater Vancouver Society and I eventually took on the Presidency of the CMS Greater Vancouver, working on the North American Gathering in 1992 with a vibrant and effective committee. In 1994 my new husband, Rick Tipple and I became the editors of the CMSC newsletter we named the Leod Voice, which I continue to publish.

Being involved in the organization brought many rewards, not the least of which was a feeling of ownership and identity with a like minded group of people who very soon became my family. Though I cannot claim direct MacLeod heritage, I feel that I am part of a family which is world wide. I do claim Scottish roots through my father's family (Hunter) and enjoy all aspects of the Scottish culture.

Attending clan gatherings has been very important to me. I have taken part in all except one North American Gathering (NAG) from the first one in 1976 and nine Parliaments in Dunvegan, Scotland beginning in 1982.

Becoming a member of the Clan MacLeod Society, whether your name is MacLeod with it's various spellings, or you are a sept of the clan, or simply as a “friend of the clan”, brings many opportunities for camraderie and friendship. You will be able to:

On behalf of Chief Hugh MacLeod of MacLeod, I invite you to join fellow clansfolk from Australia, Canada, England, France, Germany, New Zealand, Scotland, South Africa, Switzerland and the United States of America. Membership recruitment is a focus of each Clan MacLeod Society with the goal of extending, strengthening and enriching the ties we all have with our heritage and with each other. Young people especially are welcome as they are the future of the organization through whom the legacy of our heritage is passed. Many young adults have made strong friendships through their participation as members of the North Room Group in Parliament years.

Please join us – won’t you? I look forward to serving as the Canadian President for the next four years and to working in collaboration with current and new members of the Clan and with the various local Clan MacLeod Societies from across Canada to strengthen and to maintain the ties we all have with our heritage and with each other. To this end I would encourage a focus on membership recruitment and in particular recruitment of the young people – MacLeods and Septs of MacLeods. Our young folk are our future, one of the legacies I would like to pass on from my term in office is that I encouraged and enabled participation from young MacLeods across Canada. If you need any help or have any feedback to help us improve, please don't be shy, please drop me a note either via our "Guest Book" or get in touch directly through our "Contact" page and I or one of the Society Presidents will be happy to respond.

Once again special thanks to Ian C. MacLeod, Past President of the Clan Macleod Societies of Canada, for his superb input and insight into Clan MacLeod matters. Ian has been gathering input for many years and without his outstanding contributions we would have been unable to produce this website.