The full MacLeod history will not be repeated here, as it is more than amply described on many websites, including these three main sites below: -

Leod, progenitor of the Clan, lived in the early 1200s.  He was son of Olaf, King of Man & The North Isles, and descended from Norse kings.

The surnames MacLeod, McLeod (and variants) are Anglicisation’s of the Gaelic Mac Leòid, meaning “son of Leod”.  Leod comes from the Old Norse, Ljótr, which means “ugly”, or “ugly wolf”.  So the name MacLeod means “son of the ugly”

However, Leod could have been handsome!  I have a theory, with no historical support (or rebuttal), that Leod was actually very handsome.  Leod was born very close in time to the days of Robin Hood.  One of Robin Hood’s “merry men” was “Little John”, who was actually a large man.  So if a large man would be called “little”, it stands to reason that a very handsome man could be called “the ugly”.  This theory works for me!

Leod’s two sons, Tormod & Torquil, founded the Clan’s two main branches: MacLeods of MacLeod (or Harris) & of Lewis (or “of the Lewes”).

Historically, the MacLeod lands were on the Western Isles of Skye, Lewis, Harris & Raasay and on the NW coast of Scotland (Assynt, Coigeach, Gairloch & Glenelg).

Today, the Clan is centred on the Isle of Skye at Dunvegan Castle, the oldest continuously inhabited castle in Great Britain.

Chiefs:  For more detail, see the text later in this document.  The Clan is led (since February 12, 2007) by Chief Hugh MacLeod of MacLeod, the 30th Chief of the Clan MacLeod of MacLeod, supported by the Chiefs of the MacLeod’s of Raasay and Lewis, being brothers:

Emigration: Many MacLeods emigrated to the world, from the mid-1700s to the late 1800s, due to:

Work and land opportunities elsewhere, in the Commonwealth and Continental Europe
Foreign military service, which, at that time, was a “profession”.

Foreign Successes: The MacLeods, like many Scots, excelled in their new countries, for at least three reasons:

They had come from a poor and often harsh environment (quite common for many immigrant groups), which equipped them to handle the rigours of the “New World”.
They spoke English (as well as, in many cases, Gaelic), making them, at least within the British Empire colonies, better able to adapt, and
Maybe most importantly, most were literate, making them valuable employees.

Education may have been the biggest factor in their success.  Starting from 1561, led by John Knox (Knox Presbyterianism), steps began towards a system of universal education in Scotland (Knox believed that if everyone could read their Bibles, they could be better Christians – but of course, they could read everything else as well).  By 1616 education in Scotland was mandated by legislation, backed by tax supported funding by 1633.  By 1700, a big part of Scotland was literate and Scotland’s education system had been developed well ahead of England or most other European countries. (School was attended six days a week for ten to twelve hours a day!).

National & International Societies: Clan MacLeod Societies have existed in Scotland since 1891; Glengarry, Ontario, Canada since 1936; & many others, often being formed as a result of Dame Flora’s (28th Chief) world travels in the 1940s and 1950s.

The Clan MacLeod Society of Glengarry was formed on November 2, 1935, by a committee of MacLeod descendants under the leadership of John D. MacLeod, this was the first Clan MacLeod Society to be formed outside of Scotland. On July 4, 1936 over one thousand MacLeods’ from across North America attended a Clan Gathering in Dunvegan, Ontario, Canada.

Dame Flora’s North American trips: In 1952 and 1953, Dame Flora made a tour of Canada and the United States (as well as Australia in 1954), seeking out MacLeods, and planting the seeds of local MacLeod societies.  She achieved some great success.

National Societies: Each National Society, depending on the size of the country and its membership, is organized and governed it its own way.  For example, Australia (society formed in 1957) and New Zealand have several “state” societies, the USA (formed 1954) has regional districts but a single national society and France, England, Germany, Scotland and South Africa have “unitary” national societies.  The Clan MacLeod Societies of Canada is an informal umbrella for about 11 local societies across Canada.

USA Society: The American Society was formed, in Chicago, in 1954.  They celebrated their 50th Anniversary at the North American gathering in Chicago in 2004.

Canadian Society: In about 1974, Arthur MacLeod Rogers went across Canada and visited local Clan MacLeod Societies or simply phoned up MacLeods in the local phone books, with a view to forming and encouraging Clan MacLeod membership.  A National body was formed, under the name Clan MacLeod Societies of Canada (CMSC), in 1975, with Arthur serving as the first President (1975 – 1979).  His son, Norman, and grandson, Brian, served on National Council, all three were lawyers.

Parliaments: The 1st world gathering, or “Parliament”, was organized by Dame Flora in 1956, to coincide with her grandson, and heir apparent, John’s 21st birthday, on August 10, 1956.  Queen Elizabeth II and Prince Philip attended that event.Initially, Parliaments were held every 3 years.  In 1974 they changed to every 4 years.  2006 was the 15th, or Jubilee Parliament.  The 1st Parliament was only 1 day.  Now it is about 7 days, and now often includes a pre-parliamentary trip to MacLeod lands other than just Dunvegan.

Youth and NRG: Each Parliament has separate activities for the younger MacLeods, in several age groups.  The most active is the North Room Group, or NRG, being the roughly 18 – 25 age group.  They were named after the room in Dunvegan Castle where the original group met at the first Parliament (they have now much outgrown that space!) The NRG arrives several days before each Parliament and takes on a work project on a MacLeod site and also assist with Parliament activities.  In exchange, they receive some subsidized housing and meals.  More importantly, they develop a worldwide network of MacLeod friends (while also finding plenty of time to “socialize”.)  Lifetime friendships are built, and the future leadership of the Clan is developed.

North American Gatherings:  In 1976 the first North American Gathering of the Clan MacLeod was held in Cornwall, and hosted by Glengarry and Ottawa societies jointly.  It alternates, every 4 years (in the 2 year interval between Parliaments) between Canada and the USA.  It usually runs for about 4 days and attracts many of the same participants as attend Parliaments.  A worldwide network of MacLeod friends is thereby strengthened.  NAG Ottawa 2008 was the 9th and NAG 2016 the tenth such event was held in Merritt BC.

Other National and International Gatherings: The first organized gathering of MacLeods outside of Scotland was hosted the Glengarry MacLeods at Dunvegan, Ont, on July 4, 1936, for over 1,000 MacLeods-pre-air travel!  Today, on an irregular basis,  world gatherings have been held in Scotland, Germany, Australia and New Zealand.

International (ACMS):  The ACMS, operating on a very modest budget, either directly sponsors, or seeks out support for, a wide range of MacLeod projects.  In recent years, those have included:

The Five Genealogy Volumes.
The Chiefs of Clan MacLeod by Alick Morrison.
The Clan Magazine (twice a year)
“The MacLeods: The Migration of a Clan” book by Jim Hunter.
Repairs to the gravestone of Chief Norman MacLeod of MacLeod “The General”.
The Dame Flora Memorial Room in Dunvegan Village Hall.
Recordings of Clan Stories as told by Norman of Suardal on CD.
The portrait of the late Chief John.
Hosting the Clan Parliament, every 4 years
Support for the DNA (genetics) Project
Genealogical research support

National (CMSC):  Because each local Clan MacLeod Society in Canada is autonomous, the activities of the CMSC are somewhat limited.  Activities have included:

The National President is both a member of, and serves on the Board of Directors of, the ACMS, so has a key role in governing the activities of the ACMS, worldwide.  This usually means that the National President travels (at his or her personal expense) to England or Scotland at least once a year, plus to Parliaments, NAGs and significant other gatherings;
Serving as a liaison between the Canadian Clan MacLeod members and the ACMS
The Leod Voice (Canadian National newsletter - twice a year)
Supporting our own “Coordinating Genealogist”
Supporting the regional societies in hosting the North American Gathering (every 8 years, in Canada)
In 2005, providing a Clan MacLeod banner, and taking part in Alberta Centenary Celebrations, at Forts Macleod and Calgary
In 2008, producing a Clan MacLeod brochure (10,000 copies)
In 2008, profiling notable Canadian MacLeods, both currently and historically.
CMSC dues are about $8.00 per member per year, of which about 75% funds the production and mailing of The Leod Voice.  All other activities are funded on less than $1.50 per member per year.

Local Societies: Each has its own activities, which may include events such as ceilidhs (singing, dancing, story telling, etc), picnics, pot lucks, Robbie Burns Day (Jan 25) celebrations and curling bonspiels.  Most produce a local newsletter and participate in Scottish events & displays at Highland Games.  Some have their own web sites.

For Canadians, there are 2 twice-yearly publications delivered to every member.

The Clan MacLeod Magazine (international), published twice yearly, since 1935.  62 glossy pages.  Co-Editors from October 2004 (Issue 99) to October 2008 (Issue 107) were Heather J. MacLeod of Canada daughter of Ian C. MacLeod (CMSC Past President) and Ardis, and Emma Halford-MacLeod, daughter of Ruari Halford-MacLeod (CMS Scotland President) and Anne.  Emma took over on her own with the April 2009 issue (Issue 108).  This showed another NRG success - Emma and Heather met at the NRG at Parliament 1998. The current editor is now Kevin Tolmie of Scotland.

The Leod Voice (Canada), published twice yearly since 1984.  Usually about 36 pages (b&w).  Rick Tipple was Editor from spring 1995 (Issue 23) to spring 2005 (#41).  Rick died of a heart attack in June 2005, but his wife, Judy, now President CMSC, has been Editor ever since. In 1998 Rick Tipple named the newsletter “The Leod Voice”.  That ties into the MacLeod name, describes the newsletter’s purpose, shows how the MacLeod’s speak out and is a pun on the yellow “Loud MacLeod” tartan – all in three words!
History file attached below if you wish to print a copy 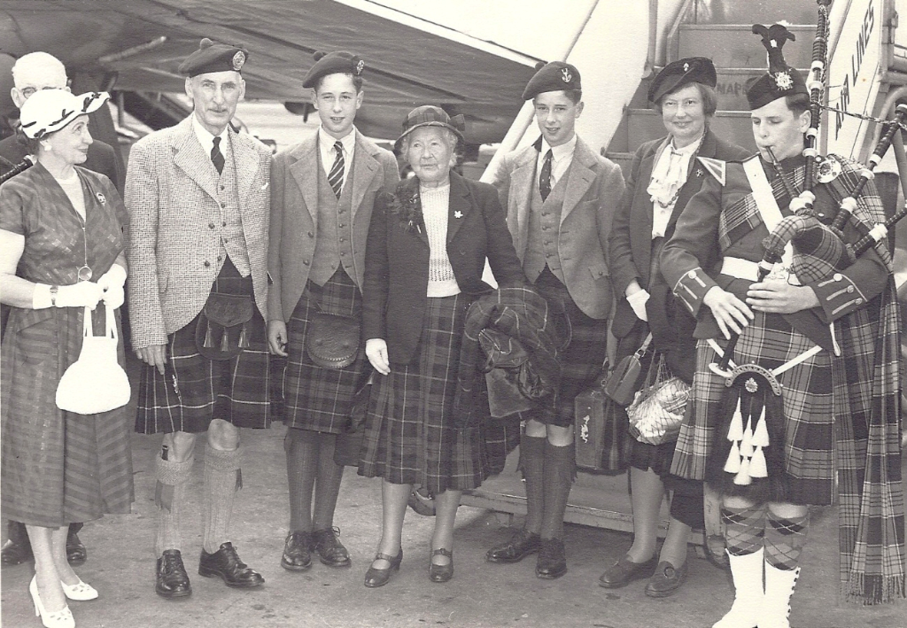